I had a lot on my plate in September. It went by in the blink of an eye. Nick and I were out of town on vacation twice during the month (posts on both trips coming soon!), I took on extra freelance work for my company and I got sick, twice. -_-

Now that I’m finally coming out of all that, it’s clear summer has made way for fall, and I’m pretty sure I just bought the last of the season’s tomatoes this weekend. I’ll blanch, peel and smash them into jars to freeze so we can enjoy them during the coldest months. I’ve been stockpiling tomatoes like this for weeks now. Just call me The Tomato Woman. (That’s what Nick calls me, and I don’t mind one bit.) 😉

>> Here’s how to make delicious stewed tomatoes with only 3 ingredients!

Since we last spoke, I’ve made some big moves. I took the plunge and bought a new camera with some of the extra money I made last month.

Sooo so so very exciting. It takes beautiful photos. The ones in this post are not from that camera, but I’ll be sure to alert you when it makes its official debut on the blog!

In other news, I’ve been reading up a storm and I need to post another round-up because there have been some real winners. More on that soon.

Additionally, in September, I tried “spending out” which, according to my new favorite inspirational person Gretchen Rubin, is important to improve happiness, especially if you’re an under-buyer like me.

Now, as far as food waste goes, I still prefer to under-buy. If I have too many things in the fridge, it makes me really anxious that something will go bad before I’ve had a chance to enjoy it. I can’t deal. I’d rather run out of something and have to go to the store for new than dump something into compost or trash. That just makes me sad! Especially when roughly one-third of the total food in the world produced for human consumption goes to waste each year (that’s 1.3 billion tons of food!!!).

As far as other things go, like toilet paper, socks, towels or blankets, it doesn’t help my happiness levels if we are constantly running out, using things that are worn through or have broken beyond repair.

Paired with the fact that my apartment is my home and my workplace, since I work remotely, it’s become pretty clear these improvements are necessary to my overall happiness and mental health.

One thing that has dramatically improved my happiness with my home recently? A rug!

I found this amazing store called Homestead Seattle that sells vintage rugs and they have stacks and stacks of them to choose from. I almost thought I wouldn’t be able to pick because they were all so beautiful but I’m so happy we took one home that day. I definitely want to cover all of my floors with vintage rugs. New life goal: collect rugs.

Also, I bought some beautiful hand-made dishes at the Ballard farmers market (which I had been eyeing for months and months) and some more pottery from Orcas Island, which are both making me so excited to get back into photographing food.

The idea of “spending out” doesn’t just cover material items, but also can be applied to larger ideas, like creativity, love, generosity. It’s trusting in abundance and not saving things for a better day. It ties in great with the practice of mindfulness.

But anyway, rugs, dinnerware, and mindfulness are not what you came here to read about today. So I’ll get to the main event.

This pasta dish has been a staple in our kitchen all season long.

The beauty of it is that the cherry tomatoes form a sauce all on their own. Brought to a boil with slightly under-cooked spaghetti, they form a rich, thick sauce that adheres nicely to each noodle when you finish cooking them together in the skillet.

And an extra pat or two of warm butter ties everything together superbly.

We’re unapologetically heavy-handed with butter in these parts, but you can also finish this off with some fancy olive oil. (I use both.)

So, let’s break it down.

Start with a pint of cherry tomatoes. Red, yellow, orange, sun gold, any type will do. The ones I used in these photos were more of a deep orange, hence the name “sun gold.”

You do not have to cut or core – nothing! Well, you should take the stems off and rinse them clean first.

Heat a large heavy skillet to medium-high. Swirl some olive oil in the pan. Pour the tomatoes in. Let them bubble and blister under the high heat for a few minutes. There may be some splashes of oil so be careful!

After a few minutes, the skins will soften enough that you’ll be able to press them down with the back of a wooden spoon. Any spoon will do. Squish those suckers and release their juices!

Then, turn the heat down to low, and cover them up. In ten minutes, they’ll be ready for the pasta.

Oh! I usually add a couple of cloves of thinly sliced garlic in there as well. Amazing.

And that’s it! Once the pasta is nearly cooked, spoon a little of the starchy water into the pan of tomatoes. Add the pasta to the pan, turn the heat up to high and boil the two together until the “sauce” comes together. Add butter now. Or not.

Make sure to dress each plate with a healthy serving of freshly grated parm!

Repeat at least once per week. It’s the fastest dinner around with the best flavor.

Plus, this is a wonderful way to use up the last of your tomatoes.

I’ve seen people on the ‘gram with boxes and boxes of tomatoes they’ve harvested from their home gardens (SO JEALOUS) – so if you’re one of those, you should try this dish. Especially if you’re overloaded with cherry tomatoes.

I just picked up 3 pints of cherry tomatoes at the farmer’s market this weekend. So, I’m off to make some more burst sun gold tomato pasta right now!

What’s your favorite way to use large batches of tomatoes? 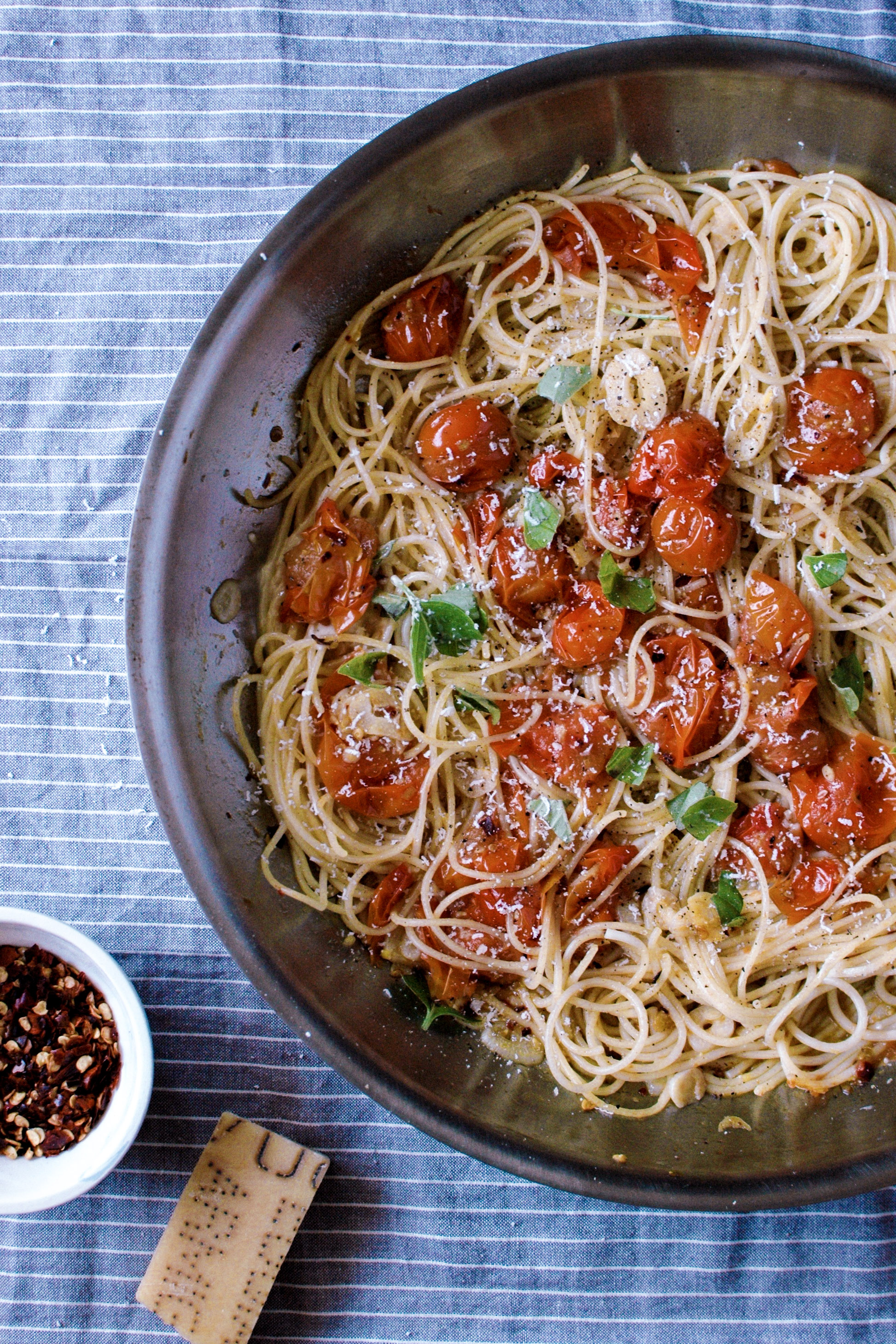 A luscious and quick tomato sauce made from sweet cherry tomatoes and garlic, cooked down with al dente pasta until thick and delicious.

This sauce can be made completely vegan if you leave out the butter and the parm at the end.

Next Post:
Crystal: A Natural Deodorant Alternative That Works