I was skeptical about this behemoth of a countertop kitchen appliance, so I ran it through a number of practical tests. Can a Vitamix really make anything?

If I was going to keep this thing in my minimalist kitchen — ON the counter, no less — it sure as hell needed to replace at least two appliances.

Here’s how things went down:

But first, some background story for context

I’ve been craving salty crunchy foods so hard. Why? Because I had a gum graft done last week and I’ve been drinking my meals for the last five days. (So as to not disturb the precious graft.) And you know what’s not easy to consume in liquid form? Savory, salty, crunchy foods.

My doctor actually used the words “baby food” to describe the type of food I should be eating. Ick!

There are basically two options for what I can eat: soup or smoothie. I love a good soup and a smoothie from time to time but there’s only so much of those a person can eat. Things I can currently make in liquid drinkable form are: soups, smoothies, flavored milks, flavored yogurts, alt milks, vegetable juices. So basically: juice or smoothies.

I’ve gotten to the point where chewing is such a novel idea that I’m relishing the day I can freely bite down on a hefty Italian sub with crusty bread that’s a tiny bit stale but still nice and chewy and slightly softened by the oil and vinegar dressing. I was craving a bánh mì sandwich earlier today and I NEVER crave those! But I’d made these awesome pickled carrots last week… and they would be perfect on a bánh mì.

Well, the pickled carrots will have to wait.

Putting the Vitamix to the test

While I bide my time slurping my breakfast, lunch and dinner for the next four weeks, I’ll be running my newest kitchen tool through the ringer. What’s the tool you ask? Oh, a Vitamix blender.

I once scoffed at Vitamix blenders because I didn’t think they were necessary or warranted the hefty price tag. I got this blender for three very specific reasons:

I’ll be keeping a running list of things I was able to successfully make with this thing and an honest review of how the Vitamix performed compared to some of my OG kitchen all-stars: a 5-cup Cuisinart food processor and an 8-cup Oster blender.

Oh, and I’m not going to bother reviewing how well it makes smoothies because those are too easy and at the bare minimum, it should do those well. But we didn’t pay all that money just to make some effing smoothies did we? No, I didn’t think so.

Can a Vitamix make coconut milk from scratch?

Okay, this one might be my favorite so we’re starting on a high note here.

I was a bit nervous pouring near-boiling hot water over a mound of shredded coconut directly into the Vitamix’s plastic pitcher, so I tempered that with some lukewarm water from the kitchen faucet. I let the coconut “steep” in the hot water bath for a few minutes, like I normally do, before blending.

Then I got to the blending action. This was an easy one to get up to speed 10 because there is plenty of water compared to coconut. The Vitamix handled this mixture like a dream. It worked for a couple minutes before I considered it done and as I peered into the steaming hot pitcher of milky deliciousness I was truly amazed to find that there was no pulp. I did not have to strain it!

For anyone who’s familiar with making alt-milk, this will be a big deal for you.

How about homemade rice milk?

Happy to report I’ve now successfully made rice milk as well with this kitchen wonder of a machine! I think I can safely say our bases are covered for alt-milk makery.

In case you need it:

Ingredient ratio for making any alt milk with the Vitamix:

For more details, check out my Homemade Coconut Milk recipe.

Can a Vitamix make pesto?

So, to be perfectly honest, I’ll have to give this another go before I lay down the hammer of judgement on pesto. I watched a number of videos of people making pesto with a Vitamix on YouTube and let me tell you, their definition of pesto is very different from my definition of pesto.

Specifically around texture. And amount of oil.

With a food processor, you can get away with using less oil and getting a chunky yet creamy texture with only a small amount of greens. With the Vitamix, you need to add a LOT of oil to get things moving and you will likely need to add a lot of greens.

I wasn’t able to get the best texture, to my liking, but maybe it’s because I was afraid of ending up with something too liquid green and no texture at all. Will keep working at this one and update if I find a better method/recipe. TBD.

This one also needs a bit more testing to receive proper judgement. The first soup I tried to make tasted like raw spices and garlic. It was super spicy because the raw garlic was so strong! Luckily I was able to repurpose the mixture into a curry later that week 🙂

Rant: Don’t even get me started on how to make soups by building flavor slowly over steady heat and seasoning with salt after each new ingredient is added. That’s a post for another day.

When I make a soup I’m happy with from this thing, I’ll be the first to document it. But for now, I am not convinced.

…Okay so we’re back with soup: round two! Second time was a success. I think there are a couple key factors to making soup work well in a Vitamix: 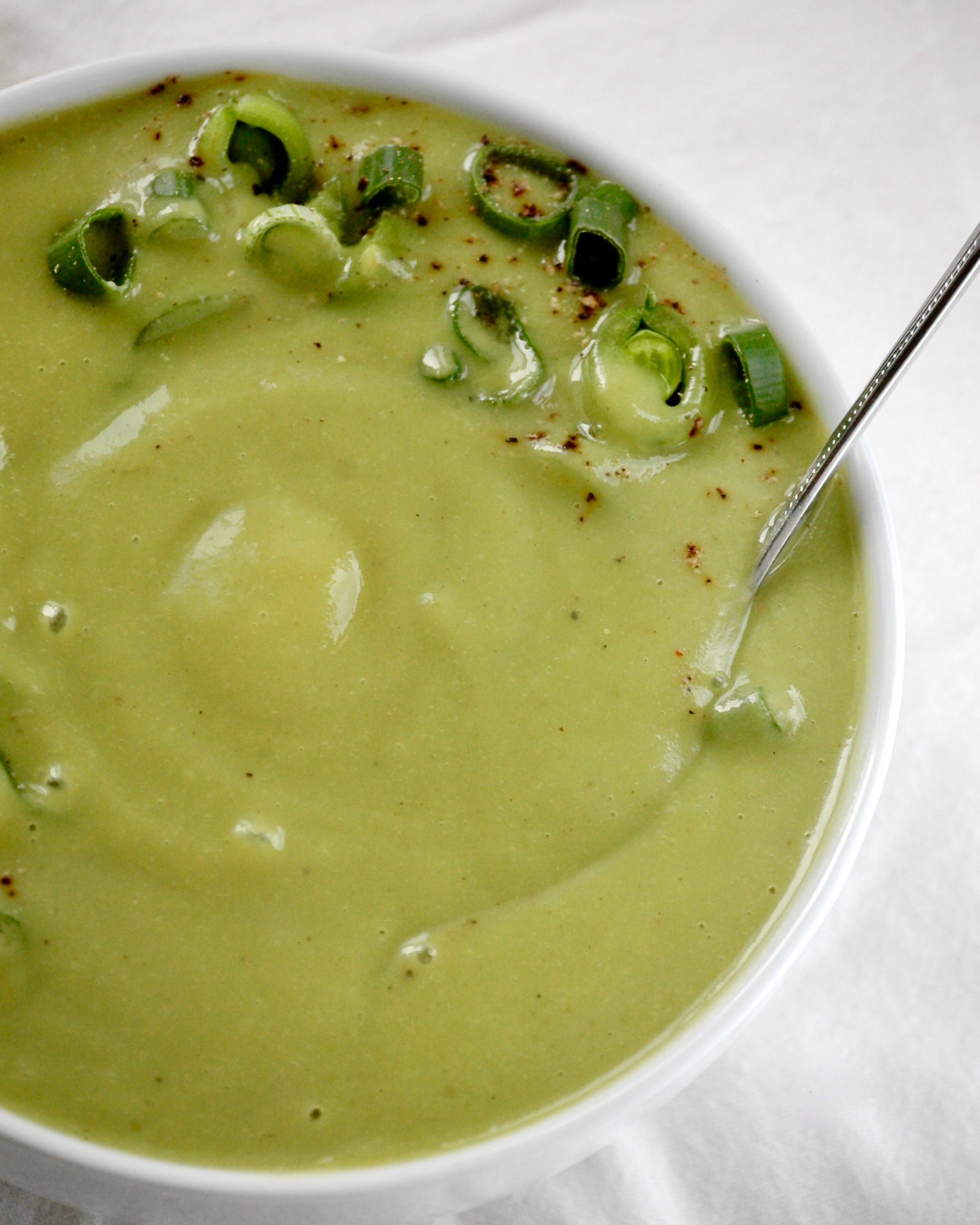 This soup cooks up like a dream in a Vitamix and we love it because it's quick and won't heat up your whole kitchen if you want soup in the summer!

The soup will thicken in the fridge but reheats beautifully.

Can a Vitamix make hummus?

This is a big one. One of the major tasks I typically delegate to my food processor is making hummus.

(Can we just stop for a moment and picture a food processor trying to make hummus within itself? It’s arms are probably much too short to get all the ingredients into the bowl. LOL.)

Anyway, hummus. I’ve written a post about the perfect process I’d found for making the best, creamiest, smoothest hummus you’ve ever tasted. Well folks, I didn’t think it was possible but the Vitamix yields a hummus so smooth and creamy I can’t even imagine going back to the other method at this point.

Only downfall is that it takes a while to scoop all the delicious goods into a serving bowl or tupperware container. I leave that part with Nick because I’m too impatient to get every last drop of goodness out, and he will sit there scraping until the pitcher’s nearly clean. (Thanks Nicholas!)

Here’s a recipe for my favorite Lemon Za’atar Hummus

*Disclaimer: I only make non-traditional hummus because of allergies, with beans that are not garbanzo beans/chickpeas. Those are drier and mealier and will likely need a bit more finagling to get the right texture.

I was actually really surprised by just how amazing our homemade Dijon mustard came out with the Vitamix! Previously, I had been using my immersion blender directly in the jar to blend it up and it would come out very, very grainy. But not in a stone ground artisanal fancy mustard kind of way. No bueno.

With the Vitamix, I took my soaked mixture, poured it into the pitcher, and away we went to dreamy creamy Dijon-town. Here’s the recipe I used, altered only slightly from the Wiki post I found online:

This is another one of those that takes forever to get out of the pitcher though. No one ever shows that part of the how-to-video because it’s just not sexy.

Final bonus round for anyone wondering if THIS is possible.

Since switching over to a zero waste lifestyle, I’m always striving to find new and creative ways to reduce down our consumer waste. Laundry detergent was a big one. That big plastic jug with syrupy blue-dyed liquid detergent quickly became a thing of my past. But I’d found a pretty decent recipe for making powdered detergent at home and we’ve been using it ever since. It’s cheap, easy, and I could make it in my food processor.

And instead of hauling ass to the story when you’re out of detergent, you can just make it at home. It’s the lazy way, really.

This was the final test I put my new Vitamix blender through and honestly, I was a bit hesitant to try it out. It involves shredding a bar soap into a fine powder and blending it with washing soda and Borax.

I was worried the grainy powders would be too aggressive for the plastic pitcher of the Vitamix and that it’d scratch the heck out of my beautiful new kitchen workhorse. I’m pretty sure homemade detergent was to blame for my food processor bowl getting all scratched up, but that could also be from years of use.

Well friends, I’m happy to report the Vitamix came out of this process unscathed. And it was super easy to get the powder from the pitcher to a jar for storage. DOUBLE SCORE.

Even better? Cleanup resulted in a squeaky clean Vitamix pitcher, much cleaner than it was when I started with it that morning. I just used whatever detergent dust was left in there and mixed it with warm water, blended on high for a minute to clean it, and wham. Done.

When I first took this beast of a machine out of its box I honestly felt it was much too big and ugly, and I thought, “Where am I going to put this monstrosity?!”

I’m happy to report that it has earned a much-coveted spot on my kitchen counter because I use it AT LEAST once per day to make any variety of the above items. Plus smoothies… of COURSE smoothies.

So if you’re considering getting a Vitamix blender to consolidate your kitchen appliances, or for any other reason, I can tell you it’s worth it. Do it, do it now.

Disclaimer 2: I did not get paid or anything to write this post (I wish I did though, ha!). These opinions are entirely my own, and even I was surprised by them.

What’s your favorite untraditional thing to make in your Vitamix blender?

How to Use a Vitamix to Make Anything