I hate to brag, but there have been sooo many delicious dishes coming out of the Kale and Compass kitchen this season. Yes, three o’s worth of them. So much so that I’m completely and utterly backlogged with posting them to this here blog.

And why is that, you ask?

Well, for one, I’ve been slammed with work and the holidays rushing up. (Classic answer.)

But do you want to know the real reason? It’s a bit embarrassing, to be honest. For those interested in reading my rant (hint: it’s about Instagram), scroll to the end of this post.

For those of you innocent folk just arriving for the cinnamon cashew coffee goods, I’ll spare you and the scroll. You’re welcome.

I first learned of cashew coffee from Pinch of Yum. I was instantly intrigued by the prospect that I could blend 4 ingredients together in one humble vessel to produce a piping hot beverage not unlike one of the schmanciest lattes served up at the snootiest of coffee shoppes (and yes, we must spell it the old-fashioned way) with the most elaborate flower-in-foam design.

Wallet tucked away in my bag (where it should stay until the holidays are over).

If your cashews are roasted, then the only thing you have to prep to make this drink is your favorite brew. Make it strong, make it dark, and most of all; make it hot. Blend it all up in a high-speed blender for around 1-2 minutes and behold the frothy goodness as you pour it into your favorite mug. Enjoy with a loved one. Or your cat. Who am I to judge?

How to brew cinnamon coffee

I don’t subscribe to the whole flavored coffee thing. I like my coffee to taste like just that, coffee. Not hazelnuts, not french vanilla “flavoring.” With the exception of cinnamon.

Now, we don’t buy cinnamon-flavored coffee, because we’re Seattleites after all and we’ve got standards. And plus, I’m hardcore into DIYing my entire life, so if ever there’s a shortcut devised by the food industry, I’ll promptly do the opposite.

So, you might be wondering, how do you make coffee taste like cinnamon without buying the chemically-enhanced “real ingredients, we swear” stuff?

With a cinnamon stick.

This is an oversimplified riff on the Mexican-style spiced coffee, Cafe Mexicano, which calls for a cinnamon stick, orange peel and brown sugar. I discovered that gem years ago during my Food Network binge days. Thanks Marcela, you’re my fave!

The trick to making cinnamon flavored coffee is that there is no trick. You stick a stick of cinnamon into the grounds and brew like you normally would. I’ve done this in a traditional Cuisinart coffee-maker and more recently a french press. Works great both ways.

After you brew your cinnamon coffee, you can rinse the stick, let it try out and reuse it a couple times before composting. (Because them sticks be expensive!)

So, when I tried cashew coffee for the first time, I 1., fell head over heels for the creamy home-brewed bev and 2., knew how I’d up the ante for this here blog. I’d add cinnamon to bring it over the top. I mean, it was already over the top, but stick with me. Heh, get it?

This drink is not for the light of heart. It’s for those who are incredibly serious about how they luxuriate at home. Because I promise you’ll melt into whatever comfy couch you’re sitting on as you sip. You’ll be a puddle of joy on your living room floor, just like Alex Mack. Be prepared.

Oh, and remove the cinnamon stick before turning the blender on. I learned this the hard way and my Vitamix has never been the same. JK it’s a beast and it’s fine and I may have actually blended a spoon instead of a cinnamon stick but I realized almost immediately. Or, err, maybe after like 20 seconds? So yeah, don’t do that. 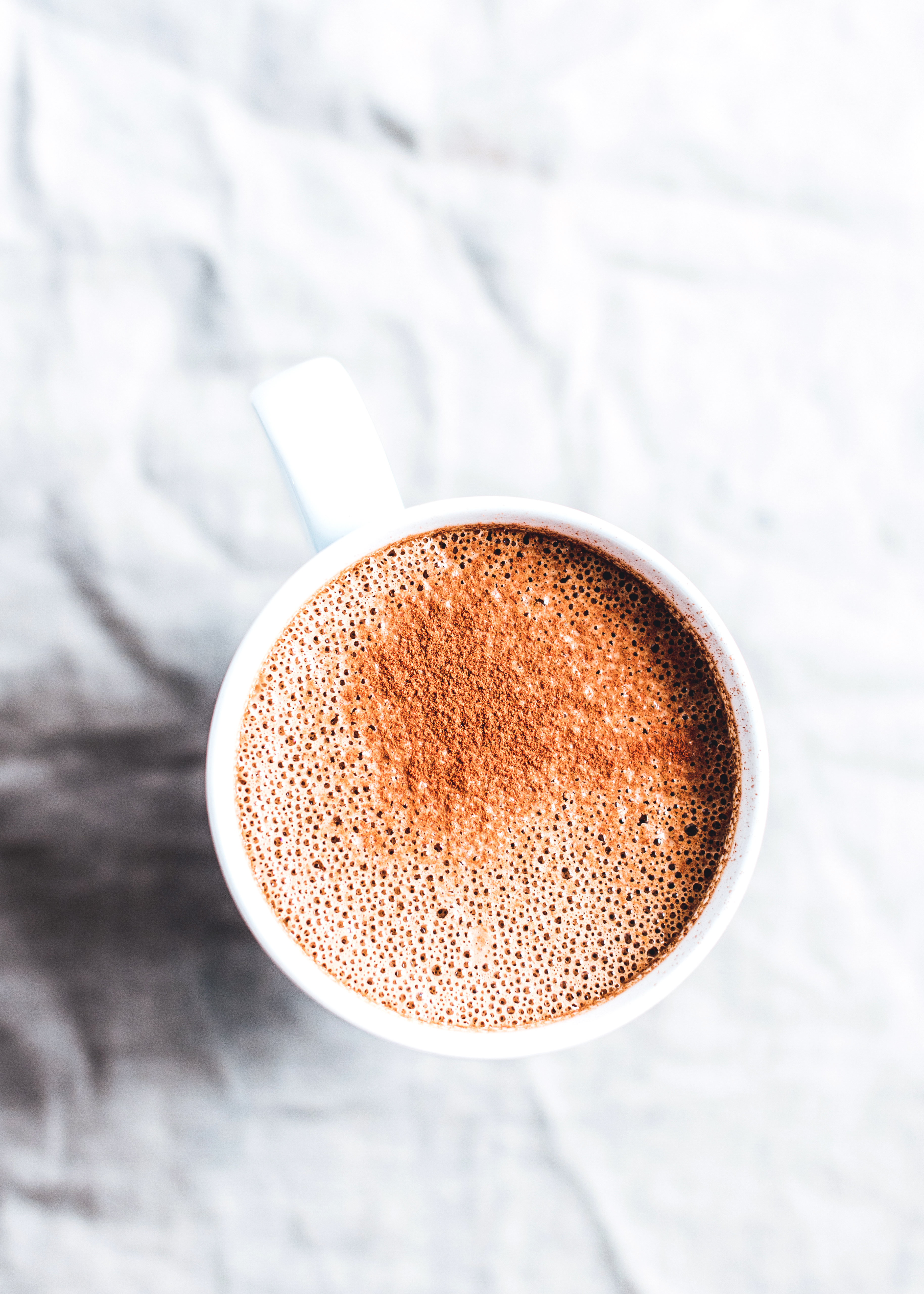 A frothy, dairy-free brew of cinnamon-flavored coffee and roasted cashews.

If your cashews are raw, soak them beforehand.

I’ve been putting all of my extra energy into building a new Instagram profile. I’ve been spending my lunch breaks obsessing over the latest photos I’ve taken and how they look placed side by side. I’ve been fixated on curating them just right, so there’s enough white-space on my feed, and so there’s not too many clashing colors. So that when users land on my Insta homepage they will instantly get what I’m about. And then they’ll follow the heck out of me.

OH, and don’t even get me started about how long it took me to craft a profile.

Problem is, no matter how much I obsess over this beloved social channel, it’s not nearly as satisfying as typing up words for this blog. It feels great to process my thoughts in a Google doc, place them into WordPress, and then, finally, to click “Publish” and send them out into the world wide web.

There’s also the sheer satisfaction I get from taking photos and editing them in Lightroom. From bringing my vision to life.

And visualizing each shoot before I begin. That part is insanely important and fun. The mental prep, the physical prep, the follow-through.

Don’t get me wrong: I love Instagram. It’s the only social channel I really enjoy and use on a regular basis. I like following along with friends’ lives and seeing how they’re doing. I like connecting with inspiring and like-minded folks from across the globe.

I just don’t quite know how to cut the cord sometimes. I’m sure I’m not alone.

And lately, with creating this new account, I can feel myself getting more and more immersed and exhausted as a result. I can’t keep up. Why should I?

I work full-time at a job I truly enjoy. I cook food to wind down, and I photograph it as a hobby. Then I write it all down because I love to document. Sure, I’d love to sell my work someday and perhaps that’s what I should be focusing my efforts on. But my living breathing portfolio, my body of work, it can’t simply live on one social channel. All tiny in squares with the same boring square crop. I want and need it to live here, on this blog.

So I will reroute my efforts back to where they belong.

Sharing my experiences with food, photography and life has to come first. I’ve got to get back to my roots.

Nick put it best, recently, when he said that I should view my Instagram feed simply as a result of my work, and not as a measurement for how many people like me or what I’m doing.

It’s time to take his advice and to get back to where I’m happiest. Jotting down notes about the latest recipes I’ve tried or the most recent photography breakthroughs I’ve had. And processing the important life stuff, too.

And publishing these damn pretty photos. In full-size. Yee-haw.